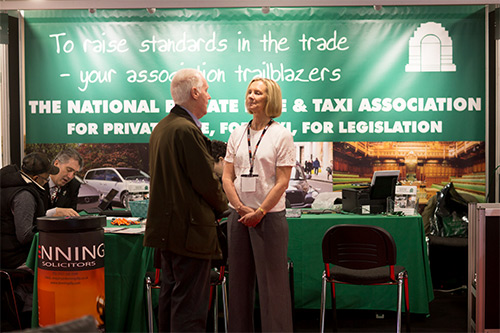 The National Private Hire & Taxi Association was founded some 25 years ago by Bryan Roland.  In addition to previous legal experience, Bryan had had wide experience in the trade over 26 years, in all possible roles from driver to operator to fleet owner.  During that time it became clear to him that members of this industry were often treated badly and looked down upon by all and sundry as uninformed – either by their licensing authority or the operator for whom they drove – and ignorant of the law.

They had one common denominator:  they perceived that there was no one source they could go to for information relevant to their particular problem.  So Bryan set out to found a National Association, whose remit – to raise standards in the trade, both actual and as perceived by the public – would ultimately improve the safety of the travelling public, improve members’ lives, and generally offer trade knowledge, experience and assistance to anyone who wanted it.

At the same time, with Donna Short, a journalist/writer, editor, trained proof reader and general wordsmith, Bryan found a publisher to establish a national newspaper to use as a sounding board to spread the word about any trade-related matter from Government consultations to court cases to general news for and about the trade.

Thus the National Private Hire & Taxi Association came into being as it still exists today; that national newspaper started out as Private Hire Monthly.  It is now known as Private Hire and Taxi Monthly.  As most people are aware, PHTM is a separate company; this Association provides the bulk of the editorial for the paper, which is subscribed to by individual drivers and distributed to over 10,000 taxi and private hire firms nationwide, plus local trade associations.  A growing number of licensing authorities are provided with copies of PHTM for distribution as well.

It was written into the NPHTA Constitution that the only requirement for members is that they hold a licence.  At first it started out as being solely for private hire operators, drivers and local associations.  However, it soon became apparent that licence holders from all sides of the industry would benefit from the Association’s undertakings; thus we started getting mixed fleet companies, individual drivers and local hackney carriage associations affiliating as well.

Sadly Bryan Roland passed away in March 2016; however this Association is very much carrying on in the manner we believe he would wish: to offer assistance and advice, and to communicate openly, with licence holders everywhere, and to eradicate the “them and us” barriers between the two sides of the trade, and indeed between licence holders and the licensing authorities that grant their licences.

We stress this often:  the NPHTA is not a union; we do not impose policy on members – we convey members’ views, opinions and goals at stakeholder meetings, Government meetings, local council meetings and at any other relevant opportunity.

The NPHTA is funded entirely from member subscriptions and renewals; those subs and renewals keep our doors open and our wheels oiled, as it were, and enable us to carry on doing what we do.  Our administrator Karen Barlow maintains our membership database, and will remind members on a regular basis that once again their annual renewal support is very welcome and much appreciated!

* Listen:  We take phone calls – from members and non-members alike – at any and all hours.  Whilst it is reasonable to hope that folk would call during ‘office hours’, sometimes emergencies crop up that need discussing there and then.  Also, we get emails from everywhere and endeavour to respond to them within hours, if not minutes. That attention to the caller or emailer has often turned non-members into members as they benefited from our assistance, or were merely grateful for being able to bend our ear and vent their frustrations.

* Communicate:  As mentioned above, we endeavour to respond to emails quickly; sometimes licensing authorities are taken aback by the speed of our reaction/response to a licensing situation, which is often diffused by such swift intervention.  We write letters and emails to licensing departments; attend local council meetings on members’ behalf; assist members to lodge appeals in the Courts on trade matters.

* Gather information:  The NPHTA is now well known for its surveys, mainly of industry statistics.  It all started with the famous League Tables which Bryan Roland instigated in 1999 and published each month in PHTM; those Tables are still available on this website and the PHTM website and are updated regularly.  In addition, we conduct regular surveys collating information on licensing fees, bus lanes, wheelchair accessible vehicles, vehicle colour livery, vehicle age restriction, allsorts.

* Inform and educate:  When this Association first started, we found that whilst licence holders were expected to know the legislation that governs their livelihood, very few licence holders were actually provided with copies of that legislation.  So we got into the habit of providing new members with copies of the primary legislation.  Then if a problem crops up, they can phone or email us and we can talk them through the relevant sections of the relevant Acts, to try to lift the fog of legalese that so often is difficult to interpret.  This now applies also to local policy and conditions of licence:  most councils post this information freely on their website, so we can discuss aspects of the local regulations with members as well.

* Find a man (or woman) who can:  We have always maintained that this Association does not pretend to be all things to everybody.  Therefore we keep a database of experts in other related fields, starting most significantly with legal representation.  We can put members in touch with taxi-wise solicitors and barristers for Committee hearings, written Advice and Opinions, and representation in Court.

Further, if a member has other issues such as planning permission, contractual difficulties with provision of schools and Social Services transport, or any ancillary trade-related dilemma, we can call upon experts in those areas as well.

* Assist in setting up local associations:  We very frequently get calls from licence holders who wish to gather together like-minded trade members in his/her area and form a local association.  This is a sound concept, as it enables such groups to gain formal recognition from their licensing authority, of which individuals often miss out.  We have all sorts of material to assist along those lines – see Forming a Local Association .  Helpful hints about setting up the group, a Draft Constitution – it’s all there for you.

So there you have it:  your National Association at your fingertips.  In case we haven’t met you face-to-face, come and have a chat at the NPHTA stand at the annual Taxi and Private Hire Exhibition, PHTM Expo , in May every year.  We’d very much like to meet you.

If we can be of any help at any time, just give us a shout – go to Contact Us for all the details.  And if you wish to join the Association, check out Membership for the relevant forms and subscription fees.  We appreciate your support – many thanks!